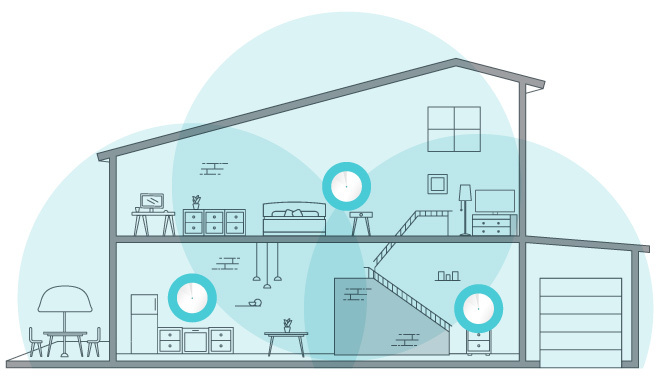 Since the time the global lockdown took effect, the working class have been looking for ways to ease down networking hassles. And Mesh Networking is the buzzword! Discover what’s there to expect as we dig into the topic a little more.

Working from home during the pandemic means shuffling between various tasks- gaming, streaming, surfing and more. With the same routine to continue for the coming years, maintaining smooth wi-fi performance is going to be a tedious task. What if we tell you there’s a solution to having consistently smoother wi-fi performance around every corner of your home? Yes, we are talking about a technology which is being widely discussed and adopted for commercial as well as domestic use- Mesh Networking.

A majority of routers that we already have in our homes can relay signal coverage to most rooms in a medium-sized home, but when it comes to larger structures with multiple walls, storeys, and other components, having signal coverage in remote spots becomes a challenge. While one may argue that range extenders can prove useful, they only provide half the bandwidth you get from the main router. Now, even if you created an access point, you can obtain more bandwidth, but doing this will require a wired connection. Moreover, using a range extender will create a new network SSID which you would repeatedly need to login to everytime you move in or out of the room. Here is where Mesh Networking comes in- letting you have access to the internet on the go.

As the name suggests, Mesh Networking is a hybrid form of networking in which we have a network of devices called nodes that behave as a primary router for the next node in reach. There is a main router which is used to communicate with the MODEM that connects to the main DSL/internet line. The nodes can be placed at different places around a home and share the same SSID and the password as the main router. This allows them to create a network mesh/ blanket around the home.

The whole idea behind this setup is to convey the same signal strength over to the farthest node in the network so there are no dead spots left around. Not all Wi-Fi systems around make use of this technology. Some of them may use a radio band to communicate with the main router as well as each other. The only difference is highlighted in the fact that the dedicated band helps free up the standard-use 2.4GHz and 5GHz bands for client use.

If we talk about a conventional wireless home network, you know how daunting of a task it can become to set it up. Mesh Wi-Fi systems on the other hand, are easy to set up without much technical exposure. User-friendly mobile applications contain illustrated setup instructions that are easy to follow. These applications suggest the best location to install the nodes so you have seamless connectivity on the go.

With user-friendly mobile apps at your disposal, Mesh Wi-Fi systems are easy to manage. You can add as many number of nodes you want and manage them remotely using your smartphone. Switching on and off the nodes as you move about the house surfing the internet becomes much easier when you have the latest Mesh Wi-Fi technology in hand.

Now that you know Mesh Networking has a significant advantage over traditional router-extender setup, it is also important to consider the price when looking to make a move. Apart from a few pricey models, most of the WiFi-6 Mesh setups in the market only cost a few bucks extra than what you would pay for a two device (router-extender) setup. From the single node systems priced at $150 to multi-node setups carrying a price tag of $500, the pricing may seem higher, however, with a bunch of technical advantages in place, it won’t hurt much to shell out a few extra bucks.

Wi-Fi systems have always been about ease-of-use. Easy to set-up and manage using agile and responsive mobile apps, offering wide-area coverage for a seamless internet experience, they have made staying connected so much easier. And with advancements in Wi-Fi technology, including Mesh Networking, it is only going to get better.

Written by RoutergAdmin
Add comment
Updating to Windows 11? Here’s everything you should know!
FacebookTwitterPinterest
All About PoE and The Ways It Can Help